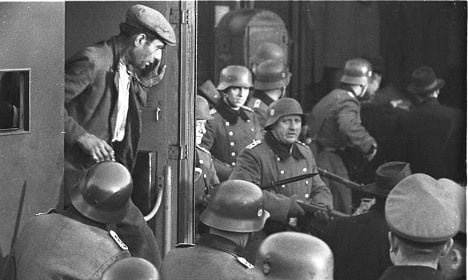 “We are asking for the right to personally, rightfully claim what is ours,” said Renee Firestone who was born in the former Czechoslovakia and spent 13 months in Auschwitz before liberation and emigrating to the United States.

Firestone, speaking to the House Foreign Affairs committee, was among elderly survivors demanding fast action on a chance to seek reparations in US courts before they die, in the first congressional hearing to focus on SNCF’s wartime role.

“In the United States, half of all survivors live below the poverty line,” unable to meet their basic needs, Firestone said.

“We survivors and our children are dealing with these tragedies day in and day out,” she said.

“And the governmental and philanthropic establishments have been sadly protective of status quo organizations and corporations, rather than protective of survivor’s rights, interests and needs.”

Ninety-year-old Holocaust survivor Leo Bretholz, who escaped from an SNCF transport bound for the Nazi death camp of Auschwitz by prying apart the windows of a cattle car he was crammed into with 50 deportees, was among thousands shipped to death camps by train.

“SNCF has been using every available legal and PR tactic to suppress the truth and avoid its responsibility to the victims of the deportations. The Holocaust Rail Justice Act is the last opportunity we will have to see justice in our lifetimes. The survivors only seek to have our day in court for the first time,” said Bretholz.

The bill seeks to give Holocaust survivors and their heirs the standing to sue in US courts.

Bretholz wrote a book about his escape and survival in World War II, telling a story of 1,000 Jews packed 50 to a rail car who were with him on that November morning in 1942 when he and 1,000 others were shipped out of Drancy, near Paris.

Many died en route to Auschwitz and 773 were gassed on arrival at the Nazi death camp in southern Poland. Only Bretholz and a friend of his escaped before the train’s arrival.

SNCF boss Guillaume Pepy last year expressed his regret over the deportations during a visit to Florida, where the French rail company was hoping to bid on a contract to develop high-speed rail services.

But the SNCF has also insisted it was forced by France’s German occupiers to help deport 76,000 French Jews to Nazi death camps.

Survivors insist SNCF collaborated with the Nazis, in a cold business relationship, and offered documents to illustrate their charges.

“SNCF willingly collaborated with the Nazis. Had the company resisted … or had they not imposed these horrific conditions, many lives would have been saved,” Bretholz said.

Carolyn Maloney, a Democratic congresswoman from New York and lead sponsor of the bill, said: “SNCF’s role in the death and suffering of tens of thousands of innocent victims is an immeasurable failure of humanity.”

Last year, the French rail company bid on a $2.6-billion rail project linking the Florida cities of Orlando and Tampa that is part of President Barack Obama’s multi-billion-dollar initiative to improve rail service across the United States, and a rail project in California.