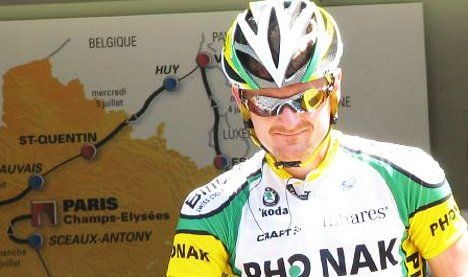 Landis was initially declared winner of the 2006 Tour de France, but was stripped of cycling’s biggest title after failing tests for excess testosterone.

Last year he admitted his guilt, but only after spending years and millions of dollars in a bid to clear his name — including by fraudulently receiving documents from the official LNDD anti-doping agency.

Landis’ former trainer Arnie Barker was also convicted and received the same suspended sentence. Neither Barker nor Landis were present for the trial and both are subject to international arrest warrants.

Prosecutors accused the pair of using the stolen documents to prepare their legal challenge to the failed Tour de France disqualification.

Lawyers for the men had pleaded their innocence.

“It was important that Floyd Landis and his former trainer be found guilty, since they insulted everyone by refusing to come to the trial,” declared Monique Dore, the lawyer acting for the French anti-doping agency.

In 2006, the anti-doping laboratory contacted police after discovering that its computer system had been hacked.

Investigators quickly traced the intrusion to self-taught hacker Alain Quiros whose computer was found to contain a treasure trove of documents stolen from the lab and other businesses unconnected to the cycling case.

This in turn led to a wide-ranging investigation of Quiros’ clients, including a former French government secret agent and a former commando who had set up an economic intelligence consultancy called Kargus Consultants.

Quiros was sentenced to two years in prison, of which 18 months will be suspended, and to pay a fine of €4,000.

The court also sentenced Thierry Lohro, a one-time agent with the French DGSE spy agency and former head of Kargus Consultants, to three years in prison, two of which will be suspended, and a €4,000 fine.

Former paratrooper Jean-Francois Dominguez was given a similar sentence.

Landis has quit racing, after finally admitting last year he took part in the doping that has blighted the sport in recent years.

Armstrong continues to deny all allegations.

Landis started his career in 1999 with the Mercury team before joining US Postal in 2001 and Phonak in 2005.