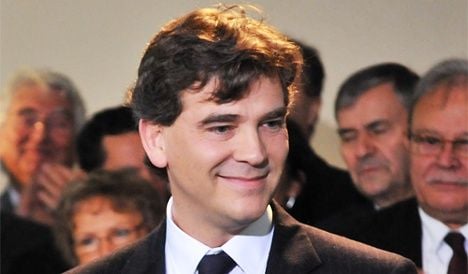 The 49-year-old MP, who represents the Saône-et-Loire region in the wine growing region of Burgundy, has called on the leader of the French socialists, Martine Aubry, to impose an age limit of 67 on candidates in future electiions.

“The Palais Bourbon and the Senate can no longer be two assemblies of the retired,” he said in an interview with daily newspaper Le Parisien. As evidence, he cited figures that 20 of the 186 Socialist MPs are over 68.

Montebourg was the surprise third-placed candidate in the recent elections to choose the Socialist candidate for the presidential elections, which will be held just before the parliamentary elections in 2012.

Some of the more senior members of parliament hit back at Montebourg’s proposal on Wednesday.

Laurent Fabius, 65, joked that Montebourg himself was “rather old” at 49, given that Fabius himself had become prime minister at the age of 37.

Veteran Socialist MP and former minister Jack Lang, 72, insisted that “real youth” is “in your mind.”

Montebourg hit back at both, saying that Fabius was lucky enough to be appointed by president François Mitterrand, “who had faith in young people.”

As for Jack Lang, he wondered if it might be better for him to “train up a young person.”