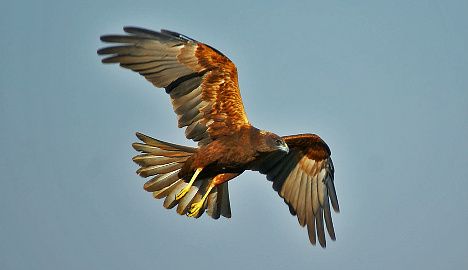 Most male marsh harriers (Circus aeruginosus) are grey, but more than a third have permanent plumage that mimics the colours of females, which are mainly brown with a white head and shoulders.

Seeking to understand the point of this cross-dressing, biologists probed the behaviour of harriers in the Marais de Brouage, a marshland in central-western France.

After identifying 36 breeding couples, they placed one of three types of decoys near each of their nesting sites: plastic figures that had been painted to look like a typical male, typical female or “female-like” male marsh harrier.

Typical males, defending their territory, were three times likelier to attack the typical male decoy than the other two decoy types.

What was even more striking was the behaviour of female-like males in breeding couples. They played their fake female role to an extreme.

In a fit of jealousy, they were more than twice as likely to attack a female decoy than a male decoy.

Impressed, the researchers believe that the gender-bending hawks get a competitive advantage by mimicking females so thoroughly.

By looking like females and acting less aggressively, they are less likely to be attacked by male competitors — which gives them a better chance of sidling up to females for lovey-dovey.

It also gives them the opportunity of moving into food-rich territory without having to fight it out with rivals, the paper suggests.

Why do typical males put up with this sneakiness?

Among the possible answers: typical males may find a benefit in having a non-aggressive neighbour, as it lessens the cost to them of having to defend their territory.

And typical males may also get a chance to copulate with the female partners of these more submissive birds.

The only other bird species whose males permanently mimic females is the ruff (Philomachus pugnax), a wader that likewise does the tranny trick in order to schmooze up to females.

The study, led by Audrey Sternalski of the Instituto de Investigacion en Recursos Cingeticos in Ciudad Real, Spain, is published in Biology Letters, a journal of Britain’s Royal Society.