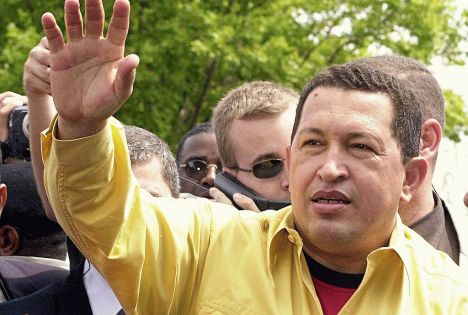 “Independently of what he has been accused of, ‘Carlos’ during that era was a worthy heir of the greatest struggles that emerged from here on behalf of the people, and popular justice,” said Chavez, a socialist ex-paratrooper, alluding to Venezuelan support for the Palestinian cause.

Chavez, who said he would not comment on the charges against the Venezuelan, also said he ordered Foreign Minister Nicolas Maduro to ensure that Carlos’ rights are guaranteed as the trial proceeds.

Carlos the Jackal went on trial Monday in Paris accused of killing 11 people in four bombings in 1980s France.

The 62-year-old has made no secret of his past as the leader of a gang that carried out attacks on behalf of Warsaw Pact intelligence agencies and far-left or pro-Palestinian causes, but denies the latest French charges.

Wearing jeans and a blue jacket, Carlos Ilich Ramirez Sanchez waved and gave the left-wing rebels’ traditional salute to a motley collection of supporters struggling to find space alongside dozens of journalists.

Carlos, born in 1949, rose to prominence in 1975 when his commando group burst into the conference room where ministers from the powerful OPEC oil cartel were meeting in Vienna, taking 11 hostage.

He was arrested in Sudan in 1994 and transferred to France, where he has since been held in various jails. In 1997 he was convicted of the 1975 murder of a civilian and two policemen, and jailed for life.

His new trial deals with four attacks that are seen as part of a private war Carlos waged against France to free two comrades, including his future wife, who were arrested in Paris while planning to attack the Kuwaiti embassy.