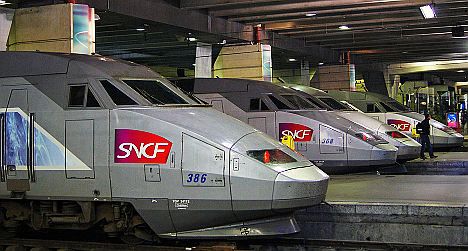 Four French unions including the largest, the CGT, are supporting the action in advance of legislation due to be examined by the European Parliament in mid-November.

National rail operator SNCF said in a statement there would be “light disruption” across the network, with most high-speed TGV trains running normally, except on the western “Atlantique” lines where seven out of ten trains would be running.

Disruption around Paris is likely to be worse with around one out of every four regional commuter trains cancelled.

International services including the Eurostar to the UK and Thalys to Brussels should not be affected. There may be some disruption to the Lyria service to Switzerland.

Train travel has been partially liberalized in France, with the freight market being opened up to competition in 2006.

Competition on international passenger routes was allowed at the end of 2009, with trains operated by Italian operator Trenitalia and French company Veolia expected to run between France and Italy from this autumn. A European Union directive requires the domestic passenger market to be opened up to competition by 2019.

One of the participating unions, the CFDT, was quoted in Aujourd’hui newspaper as saying they did not expect the strikes to have a “huge impact” but that they wanted to be part of the European action.

The union spokesman, Arnaud Morvan, claimed that competition would “bring nothing to the train network” and that it would result in “a lack of money to maintain the network in a good state.”