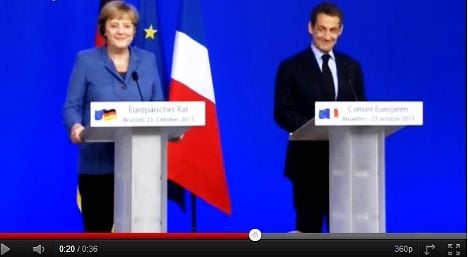 Le Monde reported that Sarkozy became irate when Cameron demanded all 27 member states should be at a meeting this week to discuss the ongoing euro crisis, rather than just the 17 countries in the eurozone.

“We’re sick of you criticizing us and telling us what to do,” Sarkozy reportedly told Cameron. “You say you hate the euro, you didn’t want to join and now you want to interfere in our meetings.”

Cameron had been arguing that all 27 countries should be involved in discussions about the fate of the euro as decisions, particularly those relating to finance, would impact all of them.

“The crisis in the eurozone is having an affect on all our economies, including that of Great Britain,” said Cameron.

In another incident, Italians were angry after the German chancellor, Angela Merkel, appeared to join Sarkozy in smirking at a question about the ability of Italian leader Silvio Berlusconi to come up with the necessary reforms.

The two leaders were asked specifically about a meeting they had with the Italian prime minister.

“What did you say exactly to Mr Berlusconi?” asked the reporter in French. “Did he commit to any new reforms in Italy? Are you reassured after your meeting given that Italy is more and more in the firing line, particularly by the ratings agencies?”

The two leaders paused before answering then looked at each other and smiled, causing much laughter among the media.

“We were together in the meeting. We have confidence in the responsibility of all Italian authorities, political, financial and economic,” said the French president.

“For an Italian it was not great, and it matters little if you are pro- or anti-Berlusconi,” said the paper in a front page editorial on Monday.

Newspaper Le Parisien spoke to Italians in Rome about the incident.

“It’s not the normal behaviour of a head of state,” said Salvatore, commenting on Sarkozy. “When the French are in difficulty they lose control and become arrogant.”

Others acknowledged the need for tough action. “Italy needs to be supervised,” said Bruno, an IT worker. “It’s the only solution.”