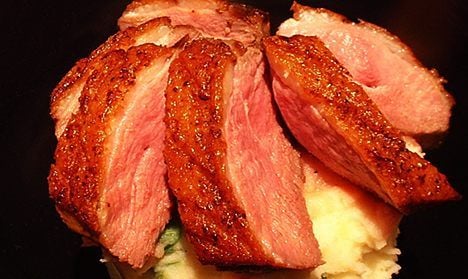 The duck dish, a speciality from the south west of France, took the top spot from blanquette de veau, or veal stew, which headed the list when the survey was last carried out five years ago. The veal dish limped in in fourth place in this year’s survey.

In a statement, TNS Sofres said “one thing is clear, the French are big meat-eaters.”

“Among the eight favourite dishes of the French, seven are meat-based, whether beef, veal, lamb or duck.”

“Only couscous and the blanquette de veau contain any vegetables among the seven favourite dishes of the French.”

According to the Cordon Bleu cookbook, “a true magret de canard is the breast meat of force-fed ducks raised to produce foie gras.”

“The breasts are extremely thick and have a much beefier taste than ordinary duck breasts.”

The dish is characterized by its pink meat and a layer of fat.

The survey revealed strong regional differences in the favoured dishes.

Not surprisingly, those in the south west strongly favoured the local magret de canard (37 percent), while eastern residents had a preference for couscous (28 percent) and choucroute, or sauerkraut (22 percent).

Northerners reinforced their image as lovers of French fries, with steak and fries (33 percent) and mussels and fries (25 percent) taking over half the votes.

Health-conscious Parisians opted for fish, with one in four preferring grilled salmon.