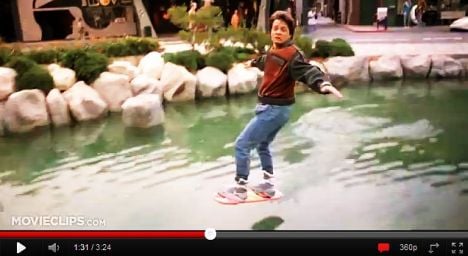 The developers of the skateboard, called MagSurf, have harnessed the science of superconductivity to propel people along a 5-metre track at the science fair, which is running until October 16th.

Superconductivity was originally discovered 100 years ago by the Dutch physicist Heile Kammerlingh-Omnes.

The superconductor effect expels the magnetic field passing through it, allowing levitation to happen. The board has a four litre tank of liquid nitrogen which is frozen at a temperature of -195˚ Celsius.

“We have built an ideal object for the public to discover the spectacular manifestations of quantum physics,” said Alain Sacuto, a physics professor at the Paris VII university.

He added that “no-one has been able to master moving human levitation” until now.

In the Back to the Future 2 movie starring Michael J Fox, his character Marty created his own levitating skateboard from a child’s scooter.

The new invention may not accelerate or corner as well as the one in the movie, but it has proved a hit with visitors young and old eager to experience the sensation of floating in the air.

The statement was made in an interview with Europe 1 in May, prompting strong criticism from teaching unions and other groups.

The minister repeated the claim in Parliament on 25th May, saying “two-thirds of the children from immigrant families leave school without a diploma.” He urged other MPs to look at the figures from Insee, the national statistics agency.

After pressure from its own unions, Insee yesterday published an analysis of the data. Jean-Paul Caille, a researcher with the organisation, said that 10.7 percent of the children of immigrant families leave school without qualifications.

It would appear that Guéant’s original claim may have been based on bad mathematics. Adding up the proportions of those failing from immigrant and mixed families gives a total of 17.3 percent.

Taking just the 10.7 percent of children of immigrant families who fail would give a proportion of two-thirds, but this is a misreading of the numbers.

Commentators were quick to condemn the minister’s original assertion. Weekly magazine Le Nouvel Observateur pokes fun at the minister by wondering whether he would have passed his mathematics Baccalaureat, the exam 18-year olds take at the end of their secondary school education.

Others have been more critical. Serge July, founder of the newspaper Liberation, wrote on RTL.fr that Guéant stirs up issues around immigration because he is in the government to be “the minister in charge of the popular right-wing, to attract those voters who might be tempted by the far-right Front National.”