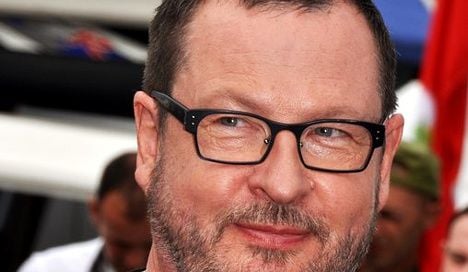 A French prosecutor told AFP however that no such charges exist.

“I was today at 2pm questioned by North Zealand police regarding a preliminary charge from the prosecutor in Grasse in France in August 2011, on a possible contravention of French law against the glorification of war crimes,” von Trier said in a statement.

“The indictment involves statements at the news conference in Cannes in May 2011,” he said.

“As a result of this serious indictment I must infer that I do not have the capacity to express myself unambiguously. I have therefore decided that from today I will refrain from all public statements,” he added.

But French prosecutor Jean-Michel Cailleau explained that the filmmaker had not yet been charged.

Von Trier’s statements “are not coherent”, he said, clarifying that a prosecutor cannot issue an indictment until a court has assessed the pre-trial investigation.

“However, we are not staying with our arms crossed after what he said at the Cannes Film Festival,” Cailleau added.

French authorities have been in contact with their Danish counterparts regarding Von Trier’s remarks, and a decision has not yet been made on how to proceed, he said.

“In this case, they can prosecute, just as we can prosecute. My decision has not been made. If the Danish say that they have the ability, we will not prosecute,” he said, clarifying that in a French court, Von Trier would face charges of “defending a war crime”.

At a press conference at the Cannes Film Festival where he was presenting his movie “Melancholia”, a reporter asked von Trier about his German heritage.

Von Trier — notorious for his black humour and political incorrectness — replied with a cheerful smile that he sympathised “a little bit” with Hitler.

“I really wanted to be a Jew and then I found out that I was really a Nazi,” he said, referring to his mother’s deathbed revelation that his biological father was actually a German.

“I understand Hitler. I think he did some wrong things, yes absolutely, but I can see him sitting in his bunker in the end.”

Later in the day, as his words raced around the world, von Trier issued a statement of apology, adding: “I am not anti-Semitic or racially prejudiced in any way, nor am I a Nazi.”

Talking to the BBC World Service, von Trier later explained: “I have this sarcastic Danish way of talking that I would use with my friends. I forgot for a second that I was talking to the world.”

Cannes organisers declared the 55-year-old director “persona non grata” for the rest of the festival, though his film was allowed to take part in the competition for the Palme d’Or, one of the most coveted honours in cinema.

US actress Kirsten Dunst won the award for best actress for her role in “Melancholia”.