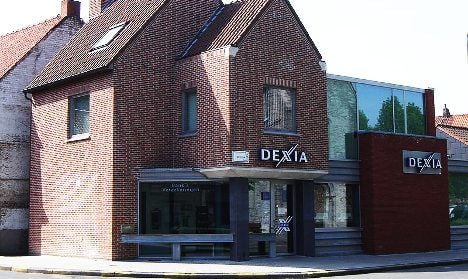 The paper said the withdrawals, a small fraction of savings in Dexia accounts, were far below the amounts pulled out during the 2008 crisis.

“In the framework of Dexia’s restructuring, the governments of France and Belgium, in coordination with our central banks, will take all necessary steps to ensure the protection of depositors and creditors,” they said.

“To this end, they undertake to guarantee any finance raised by Dexia.”

Shares in the Franco-Belgian bank plunged more than 37 percent in early trade on Tuesday, later trimming to a closing loss of around 20 percent, as French and Belgian finance ministers issued a statement of support.

After an emergency late-night meeting, Belgium approved the creation of a so-called “bad bank” to house Dexia’s riskiest debts while protecting its core business — so confirming its dismantling.

Finance Minister Dider Reynders told journalists that “all that concerns the past, notably long-term loans that were struck with local authorities, will be guaranteed by the two countries.”

Dexia has been a leader in financing for French and Belgian local governments.

French Finance Minister Francois Baroin confirmed on Wedneday the Caisse de Depots, a state-run long-term investment fund, and the Banque Postale, the banking arm of the French post office, were readying an intervention to take over loans to local governments.