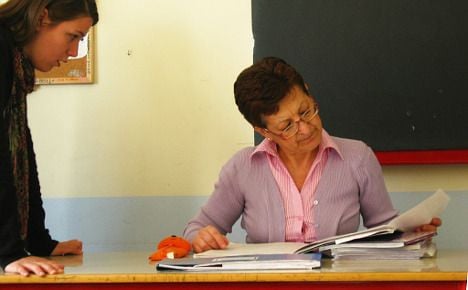 Figures released by the European Commission’s statistics agency, Eurostat, showed that French is studied by 16 percent of pupils at the primary and lower secondary school level, easily outstripping German (studied by 9 percent) and Spanish (6 percent).

English is the most popular foreign tongue with 95 percent of older pupils studying the language.

The survey was commissioned to coincide with the European Day of Languages, designed to celebrate multilingualism across the EU.

For pupils in upper secondary school, aged about 15 and older, German (27 percent) nudges ahead of French (26 percent) with just 19 percent opting for Spanish.

Romanians are the biggest French fans, with 53 percent of its younger pupils studying the language, rising to 85 percent for older pupils.

For older pupils, Ireland has the second highest level of French study (58 percent), while the UK is second for younger pupils (39 percent). Other countries with high levels of French study include Belgium (49 percent), Cyprus (41 percent) and Austria (43 percent).

However, French is on the decline in many countries. In the UK, the numbers of pupils taking French at age 16 has fallen by almost half and in 2010, French fell out of the top ten most-studied subjects for the first time.

French legislators have taken steps in the past to protect the language, most notably with the Toubon Law in 1994.

The law, named after the minister of culture who introduced it, Jacques Toubon, mandated the use of French in official government publications, all advertising, workplaces and contracts. A related law also imposed quotas on broadcast music stipulating that at least 40 percent of music played on TV and radio is in French.