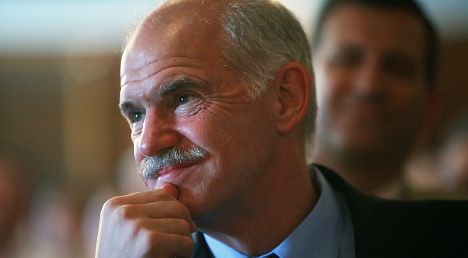 The Greek premier met France’s President Nicolas Sarkozy at the Elysee Palace, a day after German lawmakers threw the ailing eurozone a lifeline by agreeing to boost the bloc’s €440-billion ($590-billion) bail-out fund.

The plan received fresh impetus from Austria, which became the 14th of 17 eurozone members to approve the funds and the European Commission, which urged possible hold-out Slovakia to move quickly to add its name to the deal.

France will be one of the key contributors to the expanded fund while its own banks are critically exposed to sovereign debt from Greece and other weak links in the eurozone chain — Italy, Spain and Portugal.

“After the meeting with Mr Papandreou I will have the opportunity … to say exactly what our strategy is in terms of the support that we owe to a European country like Greece,” Sarkozy had said in a statement on Thursday.

A statement was expected after the talks. Sarkozy’s Prime Minister Francois Fillon said earlier in the week that once the German parliament voted, France would unveil new proposals to protect its own financial sector.

France’s concern is not just to maintain the stability of the eurozone but also to protect its own banks, which are seen as overexposed to risky debt from Mediterranean countries and short of liquidity.

Meanwhile, in Athens, officials from the European Union, European Central Bank and International Monetary Fund are conducting an audit to decide whether to disburse €8 billion ($11 billion) of crucial aid for Greece.

While some eurozone members have yet to approve the expansion of the broader bail-out fund, Greece is waiting on this tranche of a first bailout accord in May 2010 to pay its bills next month and so avoid default.

Payments depend on whether the EU-ECB-IMF troika of creditors, who got to work on Thursday studying Greek government accounts, agree that Papandreou’s harsh austerity plans go far enough to clean up Greece’s books.

After the closed door meeting, Ragoussis said he understood the need to not give in to mass protests by interest groups, such as those by taxi drivers opposed to the deregulation of their industry.

Friday’s meeting was delayed and held in a secret location after servants protesting cuts in public services occupied several ministries.

The audit is open-ended but the experts are expected to report before G20 finance ministers meet in Paris on October 14 and 15. France holds the G20 rotating presidency and will want a plan in place to reassure the markets.

A spokesman for the German finance ministry said negotiators were close to agreeing a deal to assuage Finnish concerns about Greece’s reforms. Under pressure from eurosceptic voters, Finland’s government has demanded Greece put up collateral for further bailout aid.

The Greek leader appeared in Berlin this week to plead that his government and his people had made a “superhuman effort” and he comes to Paris to seek to persuade Sarkozy to support his cause.

Papandreou was in Poland en route to Paris and met EU president Herman van Rompuy to discuss the build up to a second crucial mid-month meeting — the October 18th eurozone summit in Brussels, officials said.

European stock markets — and French banking shares in particular — have been extremely volatile in recent weeks, riding a roller-coaster of rumour about liquidity crunches, possible defaults and new rescue plans.

They climbed strongly after the German vote to back the expansion of the European Financial Stability Facility but fell back Friday following bad inflation data from the eurozone economies.

Eurozone inflation soared to 3.0 percent in September, up from 2.5 percent in August, according to figures announced on Friday, just days before European Central Bank chief Jean-Claude Trichet chairs his last policy meeting.

There had been rising hopes in the markets that lower inflation would allow the ECB cut in interest rates and give a shot in the arm to slowing eurozone economies.

Markets in London, Frankfurt and Paris fell by between two and three percent, and the euro weakened against the dollar, slipping below the $1.35 mark.