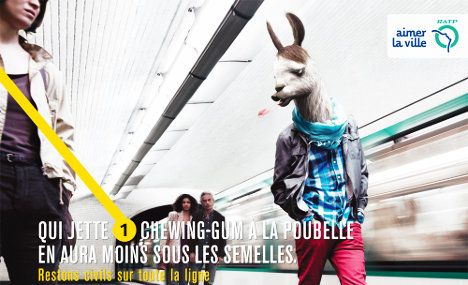 The meeting is part of a campaign launched by the transport operator, RATP, using posters across the city to remind travellers of some of the irritating practices that can turn a simple journey into a test of nerves.

“In our society, anti-social behaviour is a way of being self-assertive,” said the sociologist Francois de Singly in Le Figaro, adding that obedience or compliance is “a value that’s been in permanent decline for decades, well before 1968.”

The deputy director of the transport police, Serge Rivayrand, said that offenders are getting younger and that handling situations is getting more difficult when police intervene.

A heavyweight campaign has been running over the last two weeks pointing out examples of anti-social behaviour. The campaign uses typical scenarios that irritate passengers, such as spitting chewing gum onto the platform, talking loudly on a mobile phone or charging onto a crowded train just as the doors are closing.

RATP has been running campaigns to try to improve passenger behaviour since 1997. To help irate travellers let off steam, RATP has set up a website for them this year to share horror stories