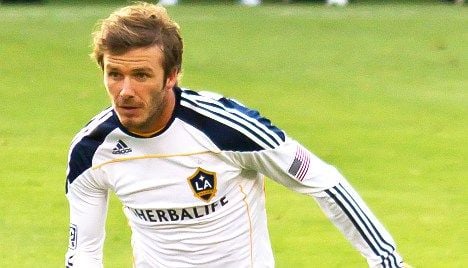 In an interview with the BBC on September 8th the club’s sport director, Leonardo, said “the door is open” for the 36-year-old player.

Le Parisien reported that it has spoken to a source close to the player who says Leonardo made direct contact with Beckham in August.

“It was a first contact,” said the source, with a view to Beckham possibly joining PSG in January. “Leonardo wanted to know David’s intentions about the next stage of his career and they spoke together about PSG.”

Beckham is reported to be flattered by the approach, but is looking at a number of offers. However, the source confirmed “no-one has talked money yet.”

Le Parisien claimed that a delegation from the owners of PSG, Qatar Sports Investments, are planning to travel to Los Angeles to meet Beckham some time in October.

A key decision maker is likely to be Beckham’s wife, Victoria, the former Spice Girl who is now a fashion designer. The paper speculated that she would be in favour of a move to the fashion capital of the world, adding that she would be “welcomed as a member of the luxury goods family” and would be able to continue to build her fashion credibility.

The newspaper also quoted sports marketing specialist Gilles Dumas as saying the arrival of Beckham at the Paris club would be an “association of two brands with worldwide appeal.”

Beckham currently plays in the US for the Los Angeles Galaxy team. The season there will end in November. His arrival in Paris would make him the second player from the English national team to decamp to France this season after former Liverpool player Joe Cole moved to Lille in August.