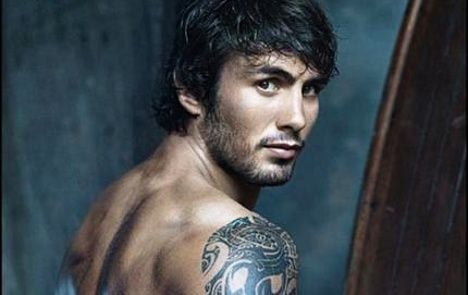 The annual calendar, which began in 2001, is issued by Paris rugby club Stade Français, but features players from other clubs.

Since its launch it has become an international sensation with its photos of well-oiled and bronzed naked rugby men. Behind-the-scenes films are popular videos on YouTube.

The 2012 calendar is due to hit stores on Thursday but a row has broken out over the inclusion of 23-year-old player Henry Chavancy.

Chavancy is a star player with rival Paris-based club Métro-Racing. The club’s president, Jacky Lorenzetti, has demanded that images of Chavancy should be taken out of the calendar.

“That a player from Racing should find himself among players from other clubs in this calendar, we say NO. Not in agreement!” said a statement from Métro-Racing.

Max Guazzini, former boss of Stade Français and still the calendar’s publisher, has rejected the demand, according to daily newspaper La Dépêche.

“The flights of fancy of Jacky Lorenzetti are of no interest to me,” he said. “It’s a very sober photo, much more so than those in his advertising. In any case, the calendar also uses Boussès, another player with Racing.”

“I regret that Mr Lorenzetti is causing a controversy about our calendar,” he said. “I know that the brilliant success of the Dieux du Stade calendar, which has sold more than 1.5 million copies in France and around the world, can stir up some jealousy.”

This year’s calendar takes as its theme a scenario where the naked muscle men are the last people on the planet. “They are trying to travel on a ship to new horizons,” according to publicity for the calendar.

Calendar publisher Guazzini saw the funny side of the incident.

“Thanks to the president of Racing for helping promote the Dieux du Stade 2012 calendar which comes out on Thursday,” he said on his Twitter account on Tuesday.