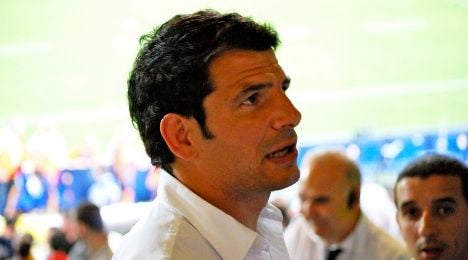 His comments came the day after France lost heavily 37-17 to the All Blacks at Eden Park in the crunch match in Pool A.

When asked by a French journalist at the end of that match if his team could still win the World Cup Lievremont angrily replied: “Go to hell with your question. The goal was and still is to qualify (for the quarter-finals.)

Addressing his relations with the press the day after the match, Lievremont said: “I really regret the detestable atmosphere that we have at these press conferences.

“I am sorry that we cannot work together in a climate of confidence and have exchanges that are useful for both sides.

“For a long time I hoped this would be the case but manifestly it is not.

“Often I come out (of the press conference) annoyed and upset because I sense this atmosphere.”

Lievremont, who has already been told his contract will not be renewed at the end of the World Cup, said he knew how the press worked and he claimed that certain journalists wanted to see France lose because that is what they had predicted.

“I have just got to take it all on the chin and make sure that it does not pollute my squad and my relations with my players. That is the most important thing,” he said.

Lievremont, who played flanker in the French team that reached the 1999 World Cup final, was a surprise appointment as national team coach four years ago, taking over from Bernard Laporte after the last World Cup.

But relations between him and sections of the French press have steadily deteriorated, especially over criticism of his ever-changing selection policies, and the ill-feeling has been apparent in New Zealand.

The French won their first two matches against Japan and Canada and need just one point against Tonga in their final match next Saturday to ensure a place in the quarter-finals and a likely showdown with England, who defeated France in the semi-finals in Paris four years ago.

The All Blacks scored five tries for a convincing bonus point victory over their World Cup nemesis.

New Zealand gave the full house 60,800 Eden Park crowd what they wanted with a dominant display to justify their tournament favouritism and take a five-point lead in Pool A with one game left in the group stage.

The All Blacks controlled all but the opening 10 minutes to part-exorcise the demons of their stunning quarter-final exit to the French at the 2007 World Cup.