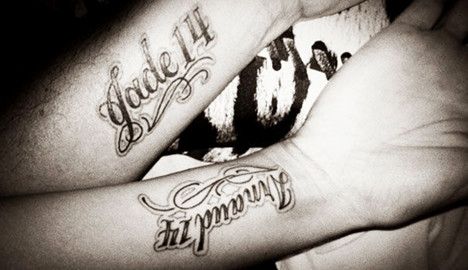 50-year-old Lagardère and his girlfriend, 20-year-old Belgian model Jade Foret, made the headlines earlier this year after a video was released of the two smooching and posing.

The film had been shot as the two were being photographed for top-selling Belgian newspaper Le Soir.

Jade Foret posted a photograph on her Tumblr site this week showing two tattoos inked close to their wrists saying “Jade14” and “Arnaud14”. The number 14 refers to the date they first met, January 14th.

“For our five-month anniversary, he had my name tattooed and I had his,” said Jade on the account.

Although the account was later closed down, Foret confirmed to her followers on Twitter that the tattoos were real with the message “définitifs!!!!”

The couple caused a sensation in July when the three-minute video of the loved-up couple was released. In it, the two were shown posing suggestively in a variety of outfits and positions with the accompaniment of an ambient music track.

Lagardère admitted in an interview with business daily Les Echos earlier this month that he regretted the film, describing it as “ridiculous.”