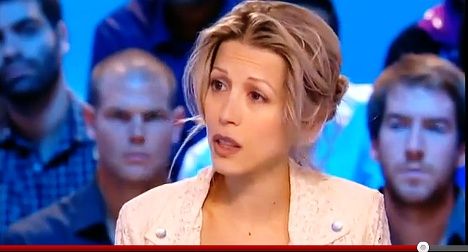 Tristane Banon, 32, spoke on primetime television the day after the one-time French presidential hopeful broke his silence, telling over 13 million viewers he did not attack Banon or attempt to rape a New York hotel maid in May.

French police are probing Banon’s allegation that eight years ago now-fallen Socialist politician and economist Strauss-Kahn lured her to a flat, locked the door behind her and attempted to rape her.

“I would bring a civil case,” Banon told private channel Canal+ in what was also her first television interview since the scandal erupted and in which she gave her version of what happened during the alleged attack.

“He double-locked the door and left the keys in the lock, I didn’t feel good but I couldn’t have imagined what was going to happen, and very quickly we fought,” the frail-looking but pugnacious Banon said.

“It deteriorated and I think that if I didn’t have a lot of luck it would have ended up as a rape,” she said, with her lawyer David Koubbi sitting next to her during the roundtable interview.

An articulate but nervous Banon hit out at critics who wonder why she waited until July to go to police, defending her mother, Anne Mansouret, who at the time recommended she not seek prosecution.

Her mother, also a Socialist politician, claims to have had “consensual but brutal” sex with Strauss-Kahn, a family friend. Strauss-Kahn’s ex-wife has threatened to sue Mansouret over the claim.

“Everybody told me not to go to the police,” Banon said, but when she went to a lawyer, Koubbi, two years ago he advised her to seek prosecution.

“I’m rightly afraid of power, I get emails every day from women who say to me: ‘I was raped and they never believed me.’ So you can imagine what would happen with Dominique Strauss-Kahn.”

“I’d like to know why is it that in this country when you accuse Dominique Strauss-Kahn, or the friend of his relatives, of something there’s always more doubt about the victim than the accused?” she said.

Paris prosecutors have not decided whether or not to charge Strauss-Kahn in the Banon case, but legal observers here feel it would be a hard case to prove eight years after the events and without physical evidence.

“The dossier isn’t that empty. It’s not just my word against his,” Banon said.

“Why are we never believed? What do I have to gain from all this? Why would I be out to get Mr Dominique Strauss-Kahn?”

The New York prosecutor has thrown out charges against Strauss-Kahn after deeming alleged victim Nafissatou Diallo unreliable, although the 62-year-old still faces a civil case over the claim.

Strauss-Kahn, who denies both alleged attacks, was released from house arrest in New York and allowed to return to France on September 4th.

On Sunday, Strauss-Kahn claimed during his television interview, conducted by a friend of his loyal wife, that his encounter with the hotel maid was “a moral failing” rather than attempted rape.

Strauss-Kahn also did not deny there had been an encounter with Banon, but said: “I was interviewed as a witness. I told the truth that in this meeting there had been no aggression, no violence, I will say no more.

“The version that has been reported is imaginary, slanderous,” he added.