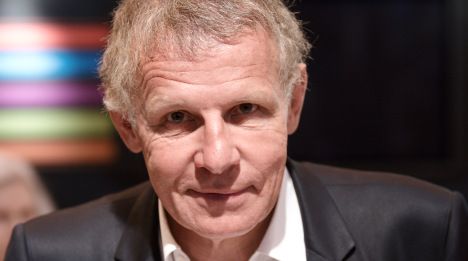 PPDA, as he is known in France, published Fragments of a Lost Woman (Fragments d’une femme perdue) in 2009, the year after his two-year relationship with 38-year-old Borne ended.

The book tells the story of Alexis, a man who becomes obsessed with a femme fatale called Violette. The publisher’s description says that “those who take the risk to love her are in danger, after being in ecstasy. Should we pity Alexis, or envy him?”

Borne charged that the newsreader gleaned much of his material from often highly intimate letters she had sent him during the course of their relationship, often reproducing them word-for-word.

“Readers understood that Patrick Poivre d’Arvor was the hero in this book,” said her lawyer, Nathalie Dubois, adding that it was clear to her that the other character, Violette, was her client.

Many of the incidents in the book, such as a trip to Polynesia, the death of an older daughter and appearing alongside her lover at the film festival in Cannes, were directly inspired by the life of Borne.

“I have never talked about my private life,” wrote Borne on her own blog. “Yet, others have done it for me.”

63-year-old PPDA is France’s best-known newsreader after anchoring the country’s most popular evening bulletin on channel TF1 for 21 years. He is also a prolific writer, having published around sixty books.

He expressed surprise that Borne was unhappy with the book. He claimed her complaints were “late and opportunistic”, adding that she had “read it before publication and said she liked it” only now to say that she “thinks she sees herself in the heroine.”

The court agreed that PPDA had breached Borne’s privacy in a way that was “particularly intimate and painful.” The court also found that eight chapters of the book were effectively copies of Borne’s letters, meaning that he was guilty of literary theft.

As well as ordering the compensation payment, the court ordered that the novel should not be reprinted or issued in paperback format.

PPDA said his former lover’s interest was “financial” and that judges had only awarded a sixth of what she’d asked for.

“It’s surprising that a woman who says she doesn’t want to be recognised should shout “it’s me!” from the rooftops,” he said.

Poivre d’Arvor has already announced that he will appeal the judgment.