The survey, which has been running since 2004, was conducted by polling organization Viavoice for newspaper Le Figaro, radio station France Inter and business school HEC.

After significant improvements earlier this year in the index, it seems that the debt crisis and stock market falls of the last few weeks have plunged professionals back into a state of gloom.

“The strength of the decline in these economic indicators is particularly worrying,” said François Miquet-Marty, president of Viavoice.

At a personal level, one in six of those questioned think their own personal finances will get worse and 80 percent think their chances of progressing their career are “weak.”

“The budget, French and German proposals on the crisis and the G20 meeting in the autumn: these meetings will be crucial for restoring the confidence of professionals,” said Miquet-Marty. 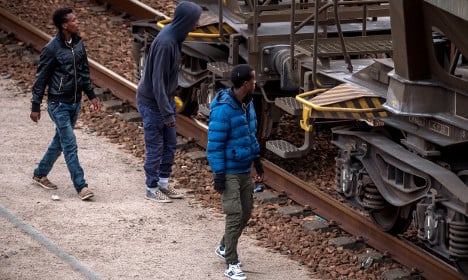 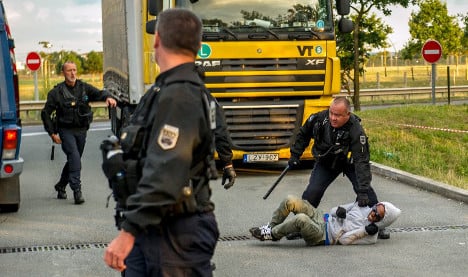 French gendarmes attempt to block a migrant after he entered the Eurotunnel site. Photo: AFP
An AFP journalist saw waves of people descend onto the railways on foot close to the Eurotunnel site around 9 pm (1900 GMT) on Thursday, only to be halted by police.
At least a dozen more made it past the cordon, but ran straight into a second line of officers waiting a hundred metres (330 feet) further down the line.
Around 3,000 people from countries including Syria and Eritrea are camping out in the northern French port of Calais and trying to cross into Britain illegally by clambering on board lorries and trains.
France has bolstered its police presence in Calais and migrants have made fewer attempts to enter the Eurotunnel than in previous nights.
Traffic through the tunnel, which had been severely disrupted the previous day, was barely affected.
Britain's prime minister, meanwhile, has come under fire for controversial comments on the crisis, which dominated British media this week as holidaymakers and truck drivers have been blocked on the British side due to delays caused by the migrants' actions.
David Cameron referred to a “swarm of people” wanting to come to his country to seek better lives and find employment, speaking while on a visit to Vietnam.
Cameron will chair a meeting of his government's COBRA emergency committee on Friday on the issue, and London has also pledged £7 million (€10 million, $11 million) to improve fencing around the Eurotunnel rail terminal at Coquelles, northern France.
Britain's Ministry of Defence is also considering freeing up some of its land to become temporary lorry parks to help reduce long queues on the motorway in Kent, southern England, due to delays, according to British newspapers The Times and The Daily Telegraph.
The crisis in Calais has spiked in intensity in the past few days, with upwards of 2,000 desperate bids nightly to sneak into the tunnel.
One man died early Wednesday, apparently crushed by a lorry as he tried to make it into the tunnel.
Another migrant, who had suffered head injuries at the weekend, died earlier in the week, authorities announced on Thursday, bringing to 10 the
total number of deaths since June.
A teenage Egyptian boy was also fighting for his life after being electrocuted after jumping onto the roof of a Eurostar train bound for London at Paris's central Gare du Nord station, a police source said.
'Send in the army'
France's interior minister sent 120 additional police officers to the scene on a temporary basis, but the migrant crisis is sowing chaos with truckers carrying freight across the tunnel, with tailbacks sometimes as long as 65 kilometres (40 miles) on the British side.
The crisis has unsurprisingly become a hot political issue on both sides of the Channel.
Cameron's comments earned him criticism from acting opposition Labour Party leader Harriet Harman, who said Cameron should “remember he is talking about people, not insects”.
The Refugee Council, a leading British charity which works with asylum seekers, said it was “awful, dehumanising language from a world leader”. 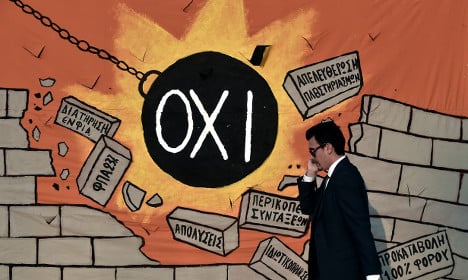 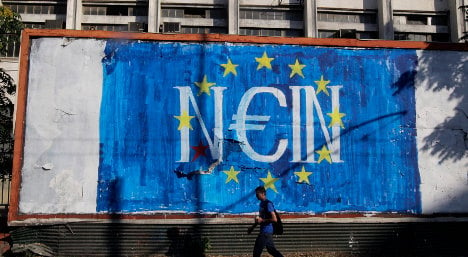