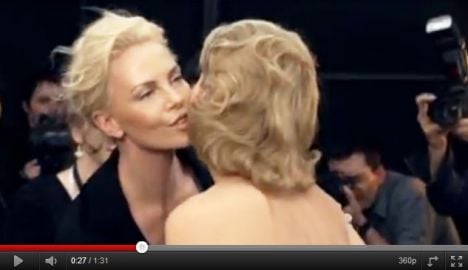 The ad, shot by film director Jean-Jacques Annaud, shows 36-year-old Theron running in high heels through the palace to its famous hall of mirrors, seemingly late for her big runway appearance. She goes barely noticed as she slips behind the scenes to get dressed.

Around her backstage are lookalikes of fashion icons from the past including Marilyn Monroe, Grace Kelly and  Marlène Dietrich.

Oscar-winner Theron has been the face of J’adore since signing a deal with Dior to in 2004.

Christian Dior suffered a wave of negative publicity earlier this year when its head designer, John Galliano, was sacked after he allegedly made racist comments to fellow guests at a Paris bar in February.

When asked about the incident in June, Theron told the New York Times that she didn’t “want to talk too much” but that she wished the dumped designer “nothing but well.”

The incident caused outrage with her fellow fragrance ambassador, Natalie Portman, who is herself Jewish.

Portman said she was “deeply shocked and disgusted” at the comments and that she would “not be associated with Mr Galliano in any way.”

Since Galliano’s removal from the label, Portman has stuck with the brand as the face of its Miss Dior Chérie perfume and will also front a new foundation, Diorskin Forever.

The verdict in John Galliano’s court case is expected to be given on Thursday, September 8th.