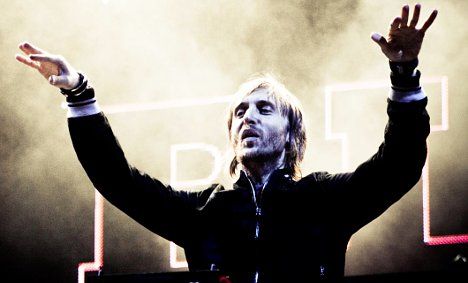 “I don’t see myself like that,” the 43-year-old Frenchman told AFP in an interview as his new double-album was released this week.

“One day my son asked me, ‘Dad, are you a star?’ I told him, ‘You know, it’s complicated. A star (he used the English word) means a star and sometimes you have shooting stars: they shine, then they fade out’,” he said.

He’s nonetheless grateful for his meteoric rise. “It’s nice because success has allowed me to have a blast on stage, to be in the studio with amazing people, but I find it all a bit bizarre,” said Guetta.

In ground-breaking partnerships with major artists like The Black Eyed Peas and Kelly Rowland, the award-winning Guetta has sold over three million albums and millions of singles that include “Sexy Bitch” and “I Gotta Feeling”, not to mention developing a major digital fan base.

The US magazine Billboard, the bible of the music industry, once wrote that he was responsible for “changing the sound of radio”.

“I found this greatly exaggerated at the time, but in fact they were right because American radio never played electro music,” he said.

“What’s more, in America everything is separate. At the time, for a piece to be played just as well on ‘urban’ (hip hop and R&B) radio as on ‘pop’ radio — a polite way of saying black or white — it was revolutionary!” he said.

Guetta works closely with his wife Cathy with whom he has two children, a boy and a girl. He has said it was listening to pirated music in the 1980s at the tender age of 12 that triggered his passion for making and mixing music, way before he started professionally, DJing at clubs in Paris.

Despite his megastar status, he’s not upheld as any sort of musical prophet at home in high-culture France. He’s big enough to have been turned into one of the puppets on wildly popular and influential prime-time satirical TV show, “Les Guignols de l’info”, but the show tends to poke fun at his music as formulaic and simplistic.

Guetta readily admits that France is “the only place where I am nervous before going on stage,” and quickly avows “appreciation” that he topped the line-up at two big annual French rock festivals, both of which broke attendance records this summer.

“After all these years when I fought so that the art of mixing, for electro to be recognised in the same way hip-hop, rock and pop is, to be invited to festivals like that, it sort of means it’s o.k. now,” he said.

His double disc album “Nothing but the Beat” was released this week by the EMI label. The first disc follows the formula that made Guetta’s name — thumping ‘urban’ electronic mixes tailored for clubs and performed by a host of big name US stars like Will.i.am, Snoop Dogg, Usher, Ludacris, Nicki Minaj, Flo-Rida and others.

The second disc is instrumental, what Guetta calls a return to his roots and the “community” who helped set him on his musical path.

“In the beginning, I only did this, I did the piece that was missing from my DJ set. Then I had the chance to meet Chris Willis, an amazing guy who comes from gospel. I learned a lot from him and I loved the more melodic cuts.”

After his 2009 album “One Love” that “pushed the vocals as far as they could go”, Guetta said he wanted again to “show my original fans” that he was “still with them”.

While the vocals have what might be called an American sound, the DJ said he wanted to “return to a French sound” for the electro part, modelled after the French Touch, a genre that popularised the French electronic music scene throughout the world in the late 1990s, with bands like Air or Daft Punk.

“My inspiration, it’s the ‘live’ side, and even more than concerts, it’s the clubs. That’s why today, even if it’s a small gig for me, I continue to play them,” he said.