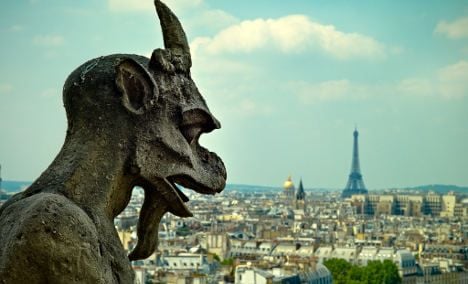 Dimitri Castrique. A gargoyle approves of the new site.

Robin Reznik, 5.02pm: During the first six hours of today the site has had people reading it from 79 countries. Fortunately France is one of them. So far so good!

Paul O’Mahony, 4.52pm:  Nicolas Sarkozy’s proposed “golden rule” for balanced budgets is “complicated, far-fetched, badly done, imprecise and easily circumvented”, says economist Charles Wyplosz. Maybe the government should call it the “beige rule” and not get people’s hopes up too much.

Paul O’Mahony, 4.24pm:  If you haven’t seen them yet, our contributor Martin Untersinger has a couple of wildly different new articles on the site: an interview with an entertaining France-based American blogger and a humorous profile of Front National leader Marin Le Pen.

Paul O’Mahony, 4.08pm:  Is it cocoa or cacao? Who cares – it’s good for you. Work less and eat more chocolate, say heart experts.

Paul O’Mahony, 3.28pm: This is the best news I’ve heard all day (via AFP): “Eat dark chocolate, watch funny movies, avoid stressful jobs, and pedal hard when biking are all ingredients in the recipe for a healthy heart, according to experts meeting in Paris this week.”  Article winging its way to the site in the next few minutes.

Paul O’Mahony, 2.35: Post-prandial fatigue has set in. Must have coffee if things are to become more animated.

Paul O’Mahony, 1.53pm: France has reopened its embassy in Tripoli, news agency AFP is reporting. Article going up on the site in the next few minutes.

James Savage, 1:34pm: Coming up soon, we’ll have the story of the French employers’ leader who is blaming the US for the woes of the European economy.

James Savage, 12:24pm: Our top story today tells of how the British news magazine The Economist has slammed France’s Socialists as ‘unreconstructed’. But it also points out that France is one of the few European countries where the left has a sporting chance of returning to power anytime soon. Read the whole article on the Economist’s website here.

Paul O’Mahony, 11.44am:  Bonjour everybody. It’s a momentous day in the life of The Local as TheLocal.fr goes live and France becomes the fourth country to get the full TL news treatment after Sweden, Germany and Switzerland. OK, so the French site has actually been up and running for a few weeks, but bar the occasional Facebook post we’ve kept it fairly much to ourselves until now.

We’ll be updating all day with details about our plans for the site as well as breaking news and views from France. If there’s anything you’d like to know about the launch, please let us know on our Facebook or Twitter pages: Facebook.com/thelocal, Twitter.com/TheLocalFrance.