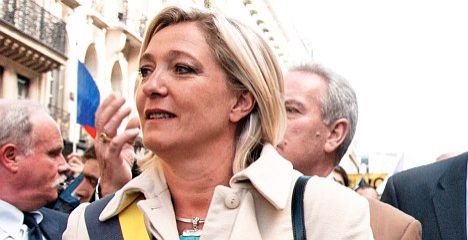 Who is Marine Le Pen, and why is she famous?

Marine Le Pen is the 43-year-old president of France’s far-right National Front party. She used to be called Marion but changed her name. Her political spots remain the same though.

So how far to the right does this leading leopard lurch?

Well, her party shares its views with a host of other nationalist parties across Europe. The FN, as they’re widely known, want to put the brakes on immigration, exit the EU, and scoot swiftly out of the eurozone. Also, they adore economic protectionism and family values. But they’re not massive fans of Muslims.

I’d never have guessed. They sound a bit bonkers to be honest. Does anyone vote for them?

They’ve actually picked up a fair share of votes of late in national, local and European elections, and they used to rule the roost in a couple of southern cities back in the nineties. But they’ve rarely had much in the way of influence at the national level.

Her surname is a bit Quasimodo, isn’t it?

How do you mean?

It rings a bell.

Someone should ring your bell, you irritating twerp. Anyway, yes, you might remember the elder of the writing implements, her father Jean Marie Le Pen. He gave the establishment a right old scare in 2002 when he got more votes than the socialist candidate to set up a runoff election with Jacques Chirac. JM to the LP stayed at the helm until January of this year, when his youngest daughter won the race to take over.

What about next year’s presidential election? Does Le Pen junior have any chance of springing a surprise?

She’s not at all likely to win the thing, but she does definitely have a core of support, and polls suggest that she could be capable of emulating papa with a strong first-round showing.

It must have been odd growing up as the daughter of Jean-Marie Le Pen.

Yes, since he was arguably France’s most hated politician. The family was once targeted by a bomb, which detonated right in front of the Le Pen apartment. She said recently that experiencing a scare like that meant nothing was likely to scare her any more.

What about her mother?

Funny you should ask. Clearing wanting to irk the patriarch, Marine’s mum appeared half-naked in Playboy magazine just after she left Jean Marie and fled the nest. It was quite the scandal considering they were viewed as one of France’s most conservative families.

Since we’re being refreshingly frank, Jean Marie Le Pen was occasionally borderline insane. He once said the Nazi occupation of France was “not particularly inhuman”, while the gas chambers were a mere “detail”, an observation that landed him in court. Never one to leave the scene of a train wreck in progress, he also reckoned that Jews had “conspired to rule the world”. As for anyone who had AIDS, they were “a kind of leper”.

Gracious, what a charmer. Is Marine as lovely a flower?

Though she still courts controversy, the maritime Le Pen has taken steps to rid the party of its barmier element. She seems to have grasped the fact that her old man’s excesses ultimately led nowhere. Casting a coquettish eye at middle class voters, she has paddled away from the putrid waters of Third Reich apologia and instead steered her craft in a more moderate direction. In fact, she has veered pretty far to the left on economic policy.

Is this the bit where I take the words national and socialist and put two and two together?

You do as you please; I put words in nobody’s mouth. But her anti-globalisation rhetoric, calls for a pension age of 60 and support for higher taxes on financial transactions are sure to appeal to sectors of the electorate left disillusioned by the fallout from the financial crisis, and its deadly successor, the debt crisis.

Final question: Is Le Pen mightier than the sword?

Oh deary me. Le Pen is about as mighty as you are funny. And with that nugget of veracity, I bid you adieu my tiresome friend.