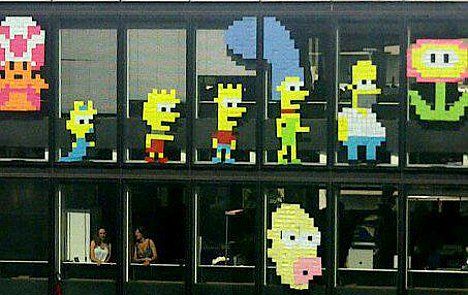 The colourful images, stuck on the windows of multi-storey office blocks, range from simple messages to cartoon characters and images of well-known personalities including Barack Obama and Marilyn Monroe.

The craze started back in January in the Montreuil business district of Paris when employees at Ubisoft decided to decorate their windows with video game characters made from post-it notes.

Employees at the offices of bank BNP Paribas across the road retaliated with their own designs.

Word spread and soon the battle had spread to Paris’ premier business district, La Défense, where employees at companies including Société Générale, Merck and GDF Suez were all involved. It’s difficult now to find a building in La Défense that doesn’t seem to be taking part.

The post-it fad has now spread to other business districts across France, including Lyon and Toulouse.

Bosses have so far seemed relaxed about the phenomenon.

“Internally, I see that teams get a boost from this,” said Caline Christophorov, a Human Resources director at Ubisoft, to newspaper Le Figaro. “We haven’t even thought about imposing any rules.”

It remains to be seen whether the impromptu decorations will be taken down when senior management return to their offices after the August holidays.