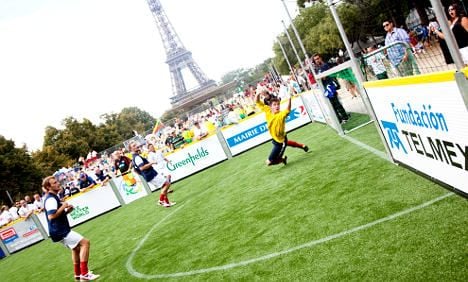 The competition aims to help homeless people regain self-confidence and the organisers say close to three quarters of the previous editions’ participants have subsequently been able to shake off their addictions, find a home or a job.

Emmanuel Petit, who scored in France’s victorious 1998 World Cup final against Brazil, was on the pitch with social entrepreneur Mel Young, who founded the Homeless World Cup in 2003, for kick-off.

National anthems were followed by a minute of silence to honour the victims of the July 22 massacre in Norway, where 77 people, mainly youths, were killed by a lone right-wing extremist.

No fewer than 64 teams, including 16 female squads, are lining up for the week-long tournament, which organisers hope will attract up 50,000 spectators.

The five-a-side games are played on small synthetic turf pitches.

“The impact of this competition is profound. It has engaged over 100,000 homeless people since it started and over 70 percent of participants have changed their lives for the better,” Mel Young said in a statement.

“The Paris 2011 Homeless World Cup is an opportunity for homeless people to move from being invisible to stand proud on a global stage, and be the true ambassadors for their country that they are,” he added.

Boris Kirakian signed up for the competition because he hopes to find a job, something he has not been able to achieve because he does not have a valid residency.

“I was born in Georgia but I have been living in France for 16 years now. Today, I have no choice and I am obliged to live with parents,” said the 27-year-old from the Normandy city of Caen.

One of his team-mates, 22-year-old Jonathan Decombard, ended up on the street at the age of 16 after a break-up in his family.

To qualify for the Homeless World Cup, participants have to be asylum-seekers or have been homeless in the course of the previous year.

“We have very diverse population. Playing near the Eiffel Tower is a great way to attracting attention and showing the homeless under a different light,” said Benoit Danneau, the head of the organising committee.

A three-day international conference is taking place on the competition’s sidelines to discuss the factors that bring people to live on the street and how they can pull themselves off it.

Brazil won the 2010 edition of the competition in Rio.