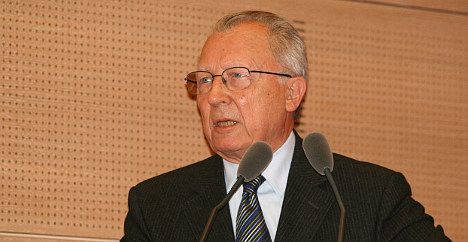 In a hard hitting interview with Belgium’s Le Soir newspaper and Switzerland’s Le Temps, he criticized the outcome from Tuesday’s summit between German chancellor Angela Merkel and her French counterpart, Nicolas Sarkozy.

“Open your eyes: the euro and Europe are on the brink of the abyss,” he said. “To avoid falling, the choice looks straightforward to me: either member states accept the robust economic partnership I always demanded, or they transfer additional powers to the Union.”

The response of the two leaders, in his view, had been “vague and insufficient.”

Jacques Delors is a veteran of the political scene whose opinions still carry a lot of weight in France.

He served as finance minister under François Mitterrand from 1981 to 1984 and was president of the European Commission from 1985 to 1994. Le Figaro described him as “the father of modern Europe” in its coverage on Friday.

Delors’ daughter is Martine Aubry, a former minister herself and architect of France’s 35-hour week legislation. She is currently running to be selected as the Socialist party candidate for the presidential elections in April 2012.

Delors was particularly critical of the plan to create a pan-eurozone finance minister. In a barely concealed swipe at the EU’s head of foreign affairs, Catherine Ashton, he doubted the impact the proposal would have.

“Does European diplomacy work any better since the creation, through the Lisbon Treaty, of a pseudo ‘EU foreign minister’?” he sniffed.

Delors supported the idea of eurobonds, which was rejected by Merkel and Sarkozy in their Tuesday meeting. The French Socialist party has also called for eurobonds to be issued.

“Right since the start of the crisis, Europe’s leaders have failed to see the reality in front of their eyes,” he said.