Bank stocks plunged in afternoon trade, with Societe General down more than 12 percent on reports of US Federal Reserves concerns about the health of European banks.

“A brutal day so far for equity markets with financials under pressure, not helped by the Sarkozy-Merkel proposals for a financials transaction tax but also by worries that a key eurozone bank is in trouble,” VTB Capital economist Neil MacKinnon told news agency AFP. 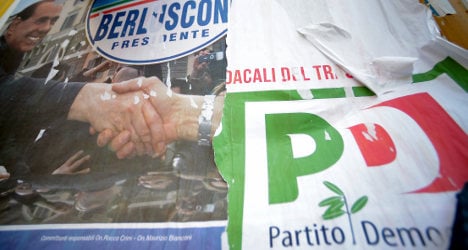 Italy should "quickly form a stable and strong government," Moscovici told AFP, adding that while the vote "creates problems" it "does not undermine progress in the eurozone."

"We must look at this situation calmly and wait for the conclusions that Italian politicians will draw from this complicated vote," he said.

The elections ended in a stalemate in parliament between right and left after a crunch vote in which the real winner appeared to be the new protest party, the Five Star Movement of former comic Beppe Grillo, which is calling for a referendum on Italy's membership of the euro.

The result has left Italy in a state of limbo with a hung parliament that is unprecedented in its post-war history and raised fears of fresh instability in the eurozone's third-largest economy.

World markets were rattled following the result, with the Milan stock market plunging nearly five percent, but Moscovici said the results did not represent a threat.

"This does not undermine the fundamentals of Italy, which is a major economy, or of the eurozone," he said.

Meanwhile the Italian election result impacted on France’s stock market amid fears that the result will lead to a delay in much need economic reforms. Shares on the CAC 40 lost around 2 percent on Tuesday morning when news of the deadlock in the polls filtered through.