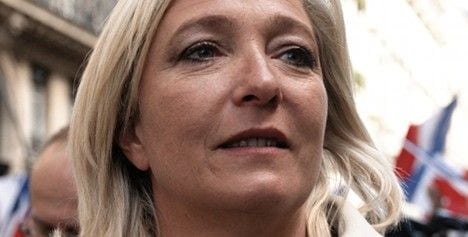 Marine Le Pen accused left-wing parties of trying to make political capital out of the carnage in Norway.

The FN had made its position on the attacks very clear, she said, with a statement from the party issued the day after the attack condemning them as “cowardly and barbaric acts”.

“From the first hours following the Oslo tragedy, several parties of the left and affiliated associations have, in a particularly shameful and cynical way” tried to take advantage of the situation, she said Sunday.

Denouncing what she said was the “despicable behaviour” of the left, she added: “It’s hardly surprising coming from parties that have no solution to propose to the real concerns of French people.”

Her statement made no direct reference to her father’s remarks.

In a statement on his website Friday, Jean-Marie Le Pen wrote that the Norwegian government’s “naivety” was to blame for the recent mass killing there.

He accused Norway of not correctly handling immigration, one of the FN’s central policy concerns — and something that obsessed Norway’s self-confessed mass killer, Anders Behring Breivik.

Standing by his comments Saturday, he told AFP: “The murderous consequences seem to me much more linked to the naivety of the Norwegian state than the madness of this crazy person.”

France’s National Front and other European far-right parties have distanced themselves from Behring Breivik, who says he carried out the bombing and shooting attacks that killed 77 people in and near Oslo on July 22.

The Front suspended one of its members, Jacques Coutela, this week for defending Behring Breivik in a blog.

But mainstream politicians reacted to Le Pen’s latest comments with outrage on Sunday, urging Le Pen’s daughter to condemn them.

Marine Le Pen, who succeeded her father at the head of the party in January, has tried to give the party a friendlier face.

But one senior member of the ruling centre-right UMP party, Valerie Rosso-Debord said: “Behind the change of first-name at the head of the FN, the political line remains the same.”

Pierre Moscovici, a leading deputy in the opposition Socialist party, also challenged her. She “has to leave aside any ambiguity — she who has talked about de-demonising the party,” he said.

The Socialists’ leader Martine Aubry said Le Pen senior’s comments “play down the savage crimes in Norway and stain the memory of the victims.”

Behring Breivik made the issue of Muslim immigration a key element of the 1,500-page document he published shortly before carrying out the attacks.