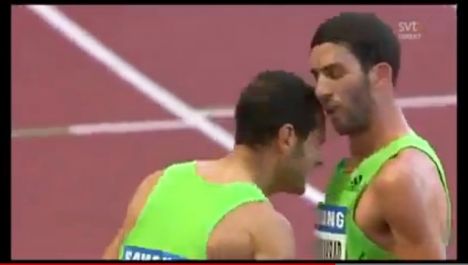 The dispute between Olympic athletes Mehdi Baala and Mahiedine Mekhissi-Benabbad came after they had both competed in Friday’s 1,500 metres race in Monaco, in which they finished 9th and 11th respectively.

Footage of the incident suggests that Benabbad lashed out at his team-mate when Baala came to console him. The two traded blows and had to be separated by a fellow competitor. They continued to shout insults at each other as they left the track while spectators jeered and whistled.

Tempers had not cooled by the time they reached the media zone, where Benabbad seemed to slap Baala. “I’m going to break you in two,” Baala shouted at him.

Baala later apologised and told TV channel Canal Plus “there was a misunderstanding. I went to comfort him after the race as he looked to be in trouble. But he said ‘if I don’t say hello, I have my reasons’ and put his forehead against mine.”

“I want to apologise to everyone as we are athletes and should lead by example. But sometimes there are reactions which are out of character,” he added. Benabaad also apologised, saying he felt “ashamed and responsible.”

Baala won bronze in the Beijing Olympics in 2003 and Benabaad is the 3,000m steeplechase Olympic silver medallist.

Jean-Pierre Schoebel, the director of the event in Monaco, told sports newspaper L’Equipe,

“This is the first time I’ve seen something like this in 25 years of doing this job … it’s very unfortunate for the image of athletics. When you have an event like this, it’s not a street fight.” He said they would lose any money they made from appearing at the event.

The two were suspended on Saturday. President of the FFA, Bernard Amsalem, said the organization’s disciplinary committee would meet “urgently to look at this incident and take the necessary measures.” The committee is expected to meet in seven days at the earliest.