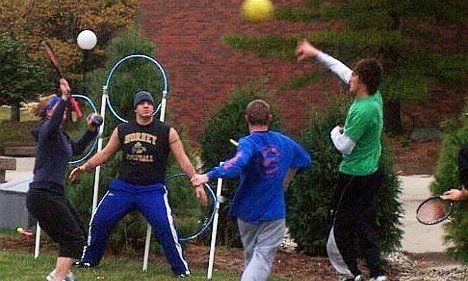 The game created by J.K. Rowling, the author of the Harry Potter books, is played on flying broomsticks in the air. The earthbound version of it, adapted for non-wizards, or Muggles, is something of a mixture of lacrosse, freeze tag, rugby, basketball and dodge ball.

“You have to be careful when colliding with another player, the impacts can be violent,” said Elodie Laruelle, 23, who organized the Nantes quidditch team on Facebook earlier this year. The players have been facing off on the field since May. “The broom can also hurt your thighs and it can get uncomfortable for the guys,” she told Reuters.

Nantes is one of the first towns in France to have a quidditch team, although there are also players in Paris and Toulouse. The sport’s popularity is much greater in the United States, where there are some 300 teams, most at colleges and universities. Some of them will participate in the fifth Quidditch World Cup to be held in New York in November.

Teams play on a soccer-type field with hoops on each end. They try to get a ball through one of the hoops, dodge other balls thrown by defenders and catch the “golden snitch” – a gold, winged ball in the series; in the real world it is a person, often dressed in gold (and sometimes wearing wings), who darts in and out of the game.

“It’s not just a sport for geeks or Harry Potter fans,” Laruelle insisted. “Half of our players, at least, don’t know or don’t even like Harry Potter.”

That is the case with Clémence, a 19-year-old student who read one or two of the Potter books, “but they got on my nerves,” she told the website 20minutes.fr.

“But running around with a broom between my legs, that’s wild.”