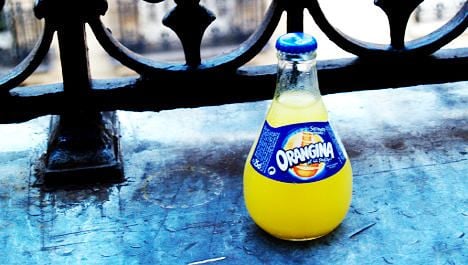 The brand, and its orange-shaped bottle, has built up a global presence since the post-World War II consumer boom in France in the 1950s and 1960s.

For French consumers from that period it is redolent of cliches of the good times after wartime hardships: summer holidays as often portrayed in the rising film industry.

It is also a formidable story of business success.

The drink was born on the southern banks of the Mediterranean, in pre-independence Algeria.

Leon Beton created “the soda from Naranjina”, in 1936 based on a recipe developed by a pharmacist in Valencia, Spain, mixing orange concentrate, sugar, and essential oils.

The concoction was intended as medicinal drink, much like its American cousin Coca-Cola a half a century before.

But World War II stopped the project in its tracks.

His company, Noranjina North Africa, produced the concentrate and advertising and partners were left to handle the rest.

Immediately, Beton looked to leisure and sun for inspiration.

The bottle — to the frustration of bottlers —  was round with the rough texture of an orange. The young entrepreneur, described alternatively as authoritarian and charming, insisted on his vision.

The French population in Algeria, before the country gained independence, soon took to the flavour, the sparkle and the message.

When the war of independence took hold, the brand crossed the Mediterranean and rode the wave of France’s booming youth culture.

Beton hired students to consume the drink conspicuously at cafe tables, and soldiers coming home from war provided a marketing push too.

Advertising was the key, with TV advertising replacing the posters of the 1950s.

Innovative and irreverent promotion kept the brand popular with a new generation of young people, as France entered a new period of change after 1968.

The success was huge and over the years, the family business became a mouth-watering corporate target.

In 1985, Beton sold Orangina to drinks giant Pernod Ricard, and retired to the wine business in France’s Bordeaux region where he still works today.