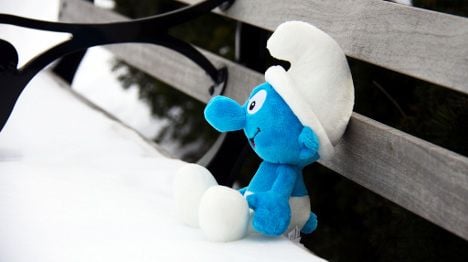 “Everybody knows the Smurfs, a real international success, but no one knows their creator Pierre Culliford,” alias Peyo, said Eric Leroy, curator of the show at the Arcurial gallery just off the Champs Elysees.

“We wanted to pay homage to the man, a real storyteller, full of humour.”

The show — running until August 30th — features more than 200 original panels retained by Peyo’s family after his death in 1992 at the age of 64, as well as photographs, albums and some personal objects.

This retrospective comes about a month after the publication of a book that infuriated some fans of the sock-topped comic book characters.

Antoine Bueno, who lectures at the high-brow Paris Institute of Political Studies, thought he was just having fun when he penned his 177-page analysis of the politics of Smurfland that’s just been published in France.

“Smurfs society,” writes Bueno by way of hypothesis in his work of spoof scholarship, “is an archetype of a totalitarian utopia” bearing the hallmarks of Stalinism and Nazism.

It’s an orderly, harmonious and male-dominated world in which Smurfs eat together, work together, apparently do not own their own homes, and never bicker over money because there is none.

Not only is Papa Smurf “all-powerful and omniscient,” writes Bueno, but his white beard gives him a curious resemblance to Josef Stalin or Karl Marx, with the bespectacled Brainy Smurf standing in for Leon Trotsky.

“I am myself a child of the Smurfs, and I did not take it seriously when I compared Papa Smurf to Stalin,” Bueno told AFP.

“I imagined that this analysis of the little world of Smurfs as a totalitarian utopia might amuse readers — but I never expected the strong reactions that it provoked.”

“Idiot… fraud… dream-wrecker… opportunist,” are some of the one-word broadsides hurled at Bueno on the Internet.

Hopefully, a Hollywood family comedy that’s due out in 3D at the end of July will bring all Smurf-lovers back together, and have them discover how much Peyo enjoyed dreaming up stories but doubted his artistic talent.

“I draw badly, and that enables me to make a simple drawing,” he once said.