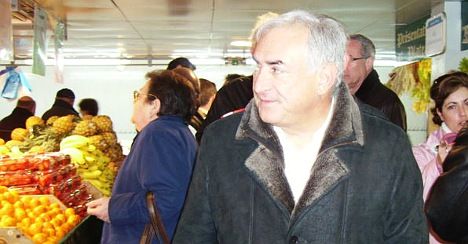 Sebban had branded the arrest “a political assassination,” hinting that the management of the hotel in which the alleged assault took place — the Sofitel, part of the French group Accor — was complicit.

“What they are saying is truly scandalous,” Gueant said on France 2 television on Monday, confirming that he was informed of the arrest a few hours after it happened by the presidential intelligence chief.

“If Mr Loncle has accusations to bring he should take judicial action or shut up. These accusations are odious,” he added. “It is out of the question that anyone in France could manipulate American justice.”

A source close to the case who asked not to be named told AFP that the management of the Sofitel New York informed Accor of Strauss-Kahn’s arrest within an hour of it happening, and Accor then told the French presidency.

“The question of timing is important. It is relevant to know when the Accor group was informed and when Claude Gueant was informed,” said Loncle on Sunday.

The French intelligence service DCRI told APF it had no role in the affair. Accor in a statement denied that any of its managers were involved and warned
the claims could be “defamatory”.

“I prefer to think of it as a trap rather than a conspiracy,” said Pierre Moscovici, a senior party member and ally of Strauss-Kahn.

“Once it is known that, as I believe, there has been a judicial mistake, we will search carefully to know what happened and how this trap was set,” he said on BFMTV television.

Strauss-Kahn, who was head of the IMF global lender and favourite to beat Sarkozy in next year’s election until the scandal hit, walked free from house arrest on Friday pending his next court appearance.

Prosecutors had admitted to doubts over the credibility of the Guinean hotel maid who accuses him of trying to rape her, saying she was suspected of lying to police.

Socialist Party leader Martine Aubry said on Sunday “no one would dare” oppose a return of Strauss-Kahn if he is cleared and decides to re-enter the presidential race.

Jerome Fourquet, head of the IFOP polling institute, told Le Figaro newspaper that obstacles remained for Strauss-Kahn even if he makes a dramatic comeback from the humiliation of the sex charges.

“He would have the image of someone who has been unjustly dragged through the mud. That could move even people who do not share his political views,” he said.

“On the other hand, when it comes to money and his lifestyle, it is more problematic, particularly for a left-wing candidate,” he added.

Opponents have branded Strauss-Kahn a champagne Socialist and for them this image was reinforced, said Fouquet, when he was seen dining in style in New York after his release from house arrest.

“We have seen that DSK has financial means far removed from those of ordinary French people,” Fouquet said. “If he comes back to politics, he will be judged on his lifestyle.”