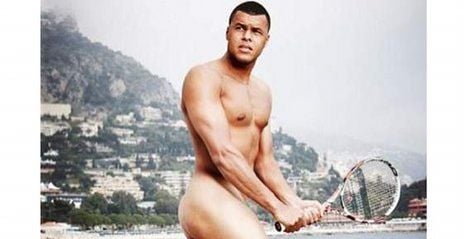 The 26-year old appeared in the magazine as part of a campaign about prostate cancer.

Pictured standing on rocks in Monaco, the finalist in last week’s Queen’s tennis tournament reveals that his bottom is the favourite part of his body.

“My ass is my best part but I don’t like my feet” he says. When it comes to women, “I like beautiful eyes.”

When asked if he withholds from sex before a big match, the player ranked 19th in the world says “that depends who is in my bed. I could never choose between sex and tennis. I think it’s better to keep both for as long as you enjoy them.”

Tsonga will be back in action in more traditional attire at Wimbledon this week. He faces Japanese player Go Soeda in the first round, ranked 131 in the world. 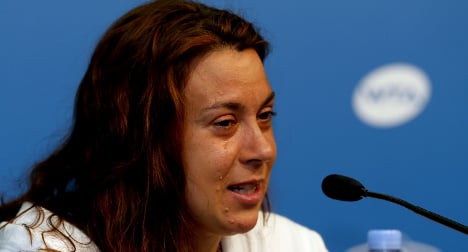 "Very surprised," was the verdict of fellow Wimbledon winner and compatriot Amelie Mauresmo, skipper of the French Fed Cup team, and who in recent months had assumed some coaching duties with Bartoli.

Mauresmo said she had not seen the decision coming but that the pair had been in contact overnight, first by text message, then by telephone.

"I am very surprised by this announcement. I had not seen any particular sign it was in the offing. I just have to take it on board and wish her all the best in her new life," Mauresmo told a news conference organised by the French Tennis Federation after Bartoli dropped her bombshell overnight in Cincinnati.

"Of course there were one or two physical things and it's true that in general these things don't get better as you get older. Clearly it was too much for her," Mauresmo, the 2006 Wimbledon and Australian Open champion, said in allusion to Bartoli's confession that the game had been taking too much out of her in recent months as she finally captured her first Grand Slam singles crown at the 47th attempt.

Forget said he worried the decision might have been made in haste following a bad defeat in the second round at Cincinnati to Romania's Simona Halep.

"Marion is a very smart girl, she is so dedicated about the sport that I'm always very cautious about someone's quotes right after a defeat, and that happened right after she lost. I hope she is going to change her mind. You don't want to have regrets looking back," said Forget.

"Being a professional player is such an exceptional job and you don't want to look back in a few months or years later and think "why did I stop?'

"Don't rush it, just don't rush it. Take time, go to the beach for a few days, go running in the park, just get your head together, spend some time with your friends… don't take such a radical decision only a few weeks after winning the biggest tournament in the world," Forget said from the ATP Champions Tour at Knokke, Belgium.

Ivanisevic, Wimbledon champion in 2001 for his only Grand Slam, said from the same event: "What she did at Wimbledon was fantastic, but she will regret this decision when Wimbledon comes (next year).

"There is nothing like playing at Wimbledon as "Wimbledon champion". I couldn't defend, I was injured," reflected the Croatian, who had to cry off a title defence in 2002 before a 2004 swansong.