France's Christine Lagarde failed on Tuesday to win public backing from India for her bid to lead the IMF as she continued her global roadshow aimed at overcoming opposition in emerging countries.

"/> France's Christine Lagarde failed on Tuesday to win public backing from India for her bid to lead the IMF as she continued her global roadshow aimed at overcoming opposition in emerging countries. 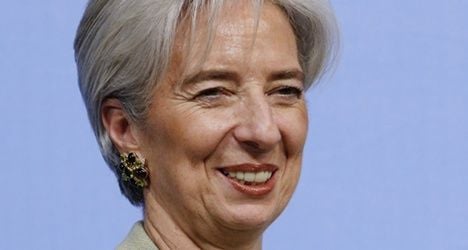 The French finance minister, who has already travelled to Brazil to press her case, met Prime Minister Manmohan Singh and Finance Minister Pranab Mukherjee during a day of talks with the Indian leadership.

“I was not here seeking assurance or reassurance. I was here to present my candidacy,” she told reporters afterwards, adding it would have been “premature and arrogant” to expect India to back her.

New Delhi and other large emerging powers have been highly critical of Europe’s stranglehold on the managing director position at the Washington-based IMF, which has been filled by a European since its inception in 1944.

“The selection of the managing director of the IMF or that of the World Bank should be on the basis of merit, competence, and (be made) in a transparent manner,” Mukherjee said after Tuesday’s meetings.

Commentators had predicted before Lagarde’s arrival that India would be unlikely to back her, preferring instead to focus on trying to work with allies in the emerging world to form a consensus on their own candidate.

“She’ll be received warmly, but I’m not sure she will receive open Indian support,” Brahma Chellaney from the Centre for Policy Research think-tank in New Delhi had predicted in an interview with AFP on Monday.

“It’s not possible to say whether there will be a common candidate,” he said.

Lagarde, a 55-year-old former lawyer, has pledged to reform the IMF to give emerging and developing countries more power.

India has so far declined to publicly support any candidate in the race to fill the top job at the lender, which fell vacant with the resignation of Dominique Strauss-Kahn over allegations of sexual assault in New York last month.

In a New York court on Monday, the 62-year-old pleaded not guilty to the attempted rape of a hotel maid.

The only other serious contender, Mexico’s central bank chief Agustin Carstens, is to visit Canada on Tuesday and India on Friday on a tour that has already seen him stop off in Brazil and Argentina.

“He is also a competent person and we are going to have a discussion,” Mukherjee said.

The only possible Indian candidate for the job, 68-year-old Montek Singh Ahluwalia, who heads the government’s Planning Commission policy unit, was ruled out because he is over the IMF retirement age of 65.

“I think at this point India would like to see if the Mexican candidate is going to be a credible challenger. They’re hedging their bets safely and have sat on the fence,” Chellaney said.

Prime Minister Singh has conceded that changes to the IMF and other global institutions to reflect the rise of Asia and other emerging countries will take time, telling reporters last month that it would be a “long haul”.

Other Indian officials have stressed that the current voting rights for the IMF give Europe and the United States overwhelming influence and ability to force through their candidate as the next head.

Lagarde is due in China on Wednesday before heading on Friday to Lisbon, where African finance ministers and central bankers will be meeting for the African Development Bank’s annual gathering.

Much could hinge on whether China unites with other BRICS nations rather than doing its own deal with Europe and the United States.

Some reports suggest China has agreed to back Lagarde in return for support for its own candidate as her number two.

The Times of India newspaper, quoting unnamed sources, said other Asians were also in the frame for the number two spot, such as Thai Finance Minister Korn Chatikavanij and Singapore Deputy Prime Minister Tharman Shanmugaratnam.